Hello, My Name Is…

You are probably familiar with the way Johnny Cash opened his concerts.  He would walk out on stage, go to the mike, and say, “Hello, my name is Johnny Cash.”  Elvis Presley was obviously aware of this mannerism, because he opened several of his live shows a very similar way.  That’s right.  Elvis walked on stage and announced, “Good evening, ladies and gentlemen.  I’m Johnny Cash.”  I guess he found it a good way to break the ice and get beyond pre-show jitters.

The following information in this column was gleaned from the wonderful book, “ELVIS: Word for Word” by Jerry Osborne, which contains over 300 verifiable quotes by Elvis.  While there are many sources of Elvis quotes in books and on the web, but I don’t know of any other reference containing Elvis’ stage chatter during concerts.  Osborne and his staff listened to audiotapes of more than 100 Elvis’ performances.  However, Elvis did about 700 live shows from 1969 to 1977, so there were probably many other funky introductions by Elvis we will never know about. 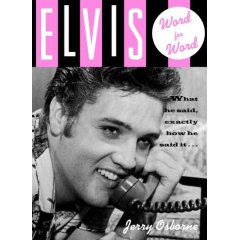 The first time “ELVIS: Word for Word” notes him using the Johnny Cash line was on August 19, 1970, and the book shows Elvis used that intro again a total of at least eleven times. The last time was June 3, 1975, in Tuscaloosa, Alabama.

Elvis must have enjoyed using the Johnny Cash theme, because he embellished it over the years.  At different times while performing at the International Hotel in Las Vegas, he had double fun by welcoming the guests to other Vegas hotel/casinos, the Golden Nugget and the Frontier, as well as the Lake Tahoe International in another city.  While performing in Portland, Oregon, Elvis said, “My name is Johnny Cash.  It’s a pleasure to be here in Oakland.”  In Seattle, he said, “I did a movie here in 1912 I think it was…It Happened at the World’s Fair.”  My favorite variation came just two days after Elvis first used the Johnny Cash line.  He said, “I’m Johnny Cash.  I used to be Fats Domino, but I lost weight.”

Prior to starting the Johnny Cash theme, Elvis had a good bit of practice fooling around with the audience. On August 28, 1969, early in his return to live concerts, Elvis said he wanted to introduce the members of the band.  After he did so, he said, “Now that they know each other, we can go on with the show.”  A few months later, he amused himself with the names of drummer Ronnie Tutt and bassist Jerry Scheff during the introductions: “So that’s Tutt and that’s Scheff.  That’s Tutt Scheff, any way you look at it, boy.”  (Think about that one for a minute.)

After using the Johnny Cash line successfully, Elvis branched out and started introducing himself as other performers.  There was Glen Campbell in 1970, and Jerry Lee Lewis, Frankie Avalon, and Johnny Rivers in 1971.  However, the novelty must have worn off, because the book notes no more trick introductions by Elvis until 1974.

As far as is known, only one other performer received more than two mentions by Elvis. His friend Tom Jones inspired at least four funky introductions.  On August 28, 1974, Elvis introduced Jones who was sitting in the audience at the Vegas Hilton.  Elvis told everyone to catch Jones’ show opening at Caesar's Palace the next night.  The ones who did, received a special treat when Elvis surprised Jones and came out on stage, too.  For the next three nights, Elvis opened his own show by saying, “Good evening, ladies and gentlemen.  My name is Tom Jones.  You came to the wrong place.”  Near the end of 1975, Elvis said, “Welcome to the show.  You know who you are…and I think you know who I am…Tom Jones, you’re right.”

Elvis introduced himself as several other singers and one bird in 1974:  Pat Boone, Sammy Davis, Little Richard, and the NBC Peacock.  Of course, that comment was inspired by the jumpsuit he wore that night.

Comedians also got the Elvis intro treatment.  Flip Wilson in 1976 was one.  Bill Cosby got it twice in 1974, including, “My name is Bill Cosby.  Elvis closed last night.”  And there was even one non-entertainer:  “I’m Jimmy Carter’s smarter brother.”

Jerry Osborne’s book “ELVIS: Word for Word” has been an invaluable help in writing this blog column.  For years I have been aware of his many books directed to rock fans and historians and to rock and roll record and memorabilia collectors.  I met him backstage last year at an Elvis Week concert.  He’s a nice guy.  I think it’s interesting that Jerry Osborne's book includes five quotes where Elvis mentioned him.  For some reason, he left out the one where Elvis introduced him as Donnie Osmond. (Only kidding.)

Posted in THE MOST UNUSUAL ELVIS ARTICLES ON THE WEB