ElvisBlog readers who are also fans of American Idol know that heavy-favorite Adam Lambert surprisingly missed the top spot this week.  I don’t think that matters a bit, his career is going to take off starting now, and he will be a huge star.

What I like is that there have been some references to the fact that Adam Lambert looks a lot like Elvis, and affects certain Elvis-style mannerisms.  Here is a quote from www.blueblood.net,  “Adam Lambert performed ‘Tracks of My Tears’ in a sharp pale cool gray suit with a dark shirt and went for a less made-up look with just dark mascara and a rockabilly hairstyle with a clearly intentional Elvis circa 1957 vibe.”  Matthew Garbutt, Conductor of the San Diego Symphony Summer Pops, said, “He should definitely do stadium concerts. He reminds me of Elvis Presley. He has that kind of attractiveness.”

But, the best one comes from David Zurawic, a critic for the Baltimore Sun:  “The icon of that era from which Adam descends is, of course, Elvis Presley…  Elvis was non-parentally-approved, bad-boy sex in the backseat of a hot car parked down by the deep, dark river with lots of pelvis-to-pelvis grinding in the midnight hour.”  I take it he sees Adam Lambert the same way.

Here are two sets of photos that show a great deal of similarity. 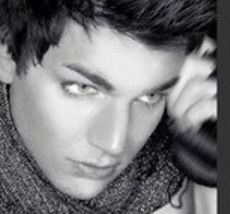 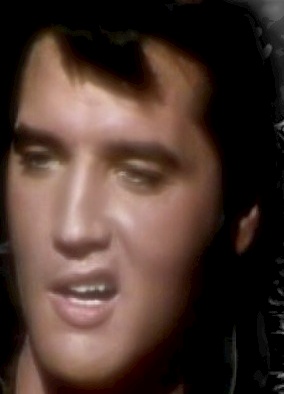 Lambert has been getting plenty of buzz recently in the pop culture media about his use of eye-liner on stage, as shown in this photo.  There is an Elvis connection here, too.

The fact that Elvis also wore eye-liner is not that well known, so now is an excellent time to repeat a rare story found in the new book ELVIS – He Touched Me by Darwin Lamm.  I was honored to be asked to write the “About the Author” section in this book and to edit the reminiscences by Pat Boone, Cassandra Peterson (Elvira), Carl Perkins, Steve Allen, and song writers Leiber and Stoller.  Here is what Carl Perkins had to say about Elvis and eye-liner.

One time I came into the dressing room to find Elvis picking at his eyes, or so it appeared.  When I got closer, I saw Elvis working on his lower line of eyelashes with a Maybelline eyeliner stick.  I asked, “Whatta ya doin’ with that on your eyes?”

“It makes your eyes look bigger,” Elvis told me as he dabbed carefully at his lashes.

“Look around here,” I ordered.  Elvis turned his head so I could peer at his handiwork.  “Damn!  They do look big.”

Bending down toward the mirror, I aimed for my upper eyelid.  Being a bit wobbly from having had a few slugs of Early Times, I missed the target and poked myself in the eye.  “Damn!”  I dropped the eyeliner and began checking my eyeball for damage.

It was the end of my experiment with eyeliner.

Is that a fun scene, or what?  Carl Perkins and Elvis, out on the road playing small towns in 1955.  Drinking and cutting up in the dressing room.  Of all the movies about Elvis out there, not one has this scene.  Someday, a smart director will do that scene and get a lot of laughs. 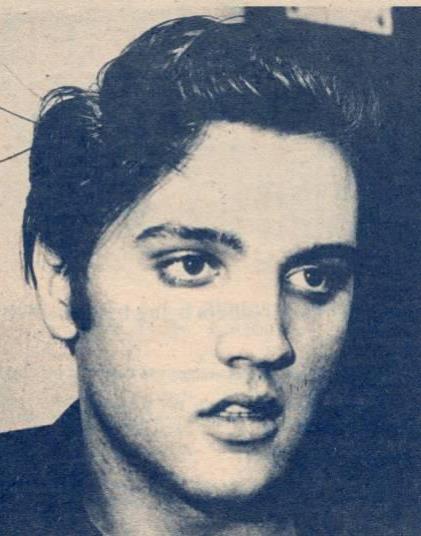 If you want to read more private memories about Elvis by his friends and associates – stories that haven’t be seen all over the place already, you ought to get ELVIS – He Touched Me.  It is available at the Graceland gift shops, if you are headed to Memphis this year.  Or, you can e-mail elvisint@aol.com and order a copy.

Posted in ELVIS and OTHER SINGERS, HISTORY, Main Page