First Look at the Latest Auction at Graceland

The Auctions at Graceland have quickly become a big part of the fun during Elvis Week and the birthday celebration each year. The fourth auction was held on January 7, 2015 and a total of 126 items were offered. That’s enough to generate several ElvisBlog articles, and this one will look mostly at the big sellers.

We will start with this tape because it has an interesting history. Shreveport, Louisiana radio station KWKH created the Louisiana Hayride and broadcast the shows live over the air. Elvis made many appearances, but his last was in December 15, 1956. By that time, Elvis was a huge national sensation, and 10,000 teenagers (rather than traditional country music fans) packed the auditorium. From the first moment Elvis strode on stage, they screamed at the top of their lungs and never let up. Flashbulbs went off like gunfire.

When Elvis finished his set plus an encore, he exited the stage. However, all the teenage girls continued their incessant screaming, effectively stopping the show. In an effort to calm them down, announcer Horace Logan first shouted the now-famous phrase, “Elvis has left the building.” It worked – but too well. The teenagers headed for the exits in droves. Management panicked and had Logan plead to them to stay in their seats because many more acts were yet to appear. It didn’t work.

The above ¼” reel-to-reel tape captured Elvis’ performance and all the the screaming, plus the first utterance of the iconic phrase “Elvis Has Left The Building.” The auction website states that it is the original, one-of-a-kind recording and set the minimum bid at $5,000. The winning bid was $10,000 including the 25% auction house premium. I’d be surprised if we don’t get a chance to see the tape in the future. With the addition of still photos, recollections by fans, and other filler material, this could easily be made into a great DVD. I sure hope so.

This signed library card illustrates how the Auctions at Graceland have boosted the value of Elvis collectibles. In December 1948, Elvis was just a thirteen-year-old boy in 8th grade when he checked out the book The Courageous Heart: A Life of Andrew Jackson for Young Readers from the Humes High School library. So this is a very significant piece of Elvis memorabilia.

The auction minimum bid was $5,000, and the winner paid $11,765 to land this prize. However, in a 2010 ElvisBlog article, an earlier sale of this item was reported. At that Heritage Auctions sale, the library card sold for $3,502. So, the seller this time made a substantial profit. It is my opinion that the excitement generated by holding the Auctions at Graceland during Elvis Week and the birthday celebrations creates more interest and results in higher prices.

This letter was one of the big stars at the auction. It is one of a small handful of Elvis’ handwritten letters known to exist. The website states, “This amazing two-page handwritten letter from 1958 is a true glimpse into the mind of Elvis during his time in Germany, as he pens his thoughts to his friend Alan Fortas. He writes to Alan as “Hog Ears,” a nickname given to Alan by Elvis. In this very personal letter, Elvis talks of his feelings towards the time he is serving.” Here is the text of the letter.

Got your letter and was glad to hear from you. Well you know I am bound to be pretty lonely or I wouldn’t be writing a letter. We are up at a training area for 50 days and believe me it’s miserable. It’s cold and there is nothing at all to do up here. I am about 200 miles from Friedberg and won’t be back until the 20th of Dec. It will sure be a great Christmas this year. “ha” I would give almost anything to be home. You know it will be March of 1960 before I return to the States. Man I hate to think about it. Of course don’t say anything about it because a miracle may happen. Boy it will be great getting out. I will probably scream so loud they’ll make me stay 2 more years. ha. I can hardly wait to start singing, traveling, making movies, and

above all seeing the old gang and old Graceland. All I do is sit and count the days. Well it’ll be over in about 15 months and as Gen. MacArthur said, “I shall return”. Tell D.J. uh, and Lewis I said hello and to hold down the fort till I get back. If you see cous, tell him I said ep skep skep skep. I have been dating this little German “Chuckaloid” by the name of Margrit. She looks a lot like B.B. It’s Grind City. Well I gotta go wade in the mud. 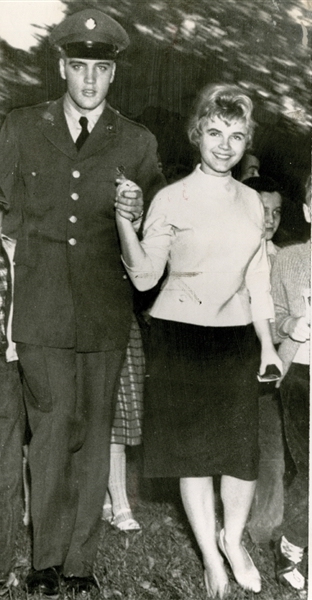 This is the little German Chuckaloid Elvis referred to in the letter. In this October 5, 1958 photo, she is identified by UPI as fifteen-year-old Margrit Buergin.

Elvis and the boys turned the Graceland smokehouse into a shooting range where they stood outside and shot through the doorway The auction offered this target with an estimate of $4-6,000, but it brought only $2,500. So we can assume the seller was disappointed. 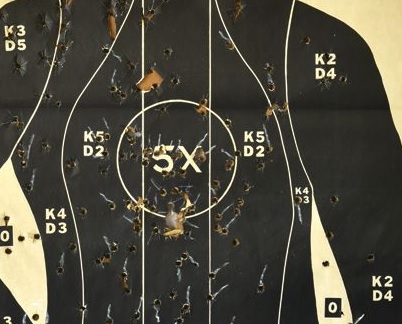 However, we can assume that is nothing compared to the poor soul who purchased another target at the August 2014 Auction at Graceland. He paid $27,000 for it, probably thinking it was one of a kind.

Bidders this time must have realized there could be many more of these in existence and bid much more conservatively. Plus, if you read the website fine print, there is no way to determine if these are Elvis’ shots or just one of the guys. It must really hurt to see your $27,000 investment drop to a sorry $2,500. 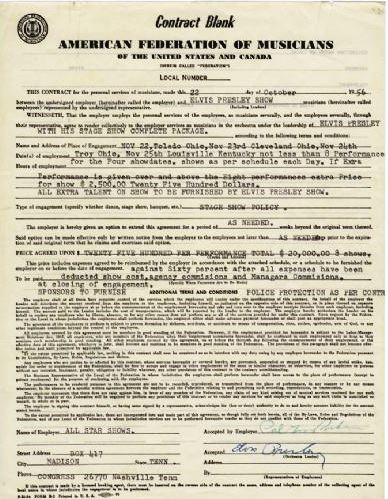 The value of an Elvis autograph varies greatly, depending on the item it is signed on. You can’t do much better than a historic contract. This is a standard American Federation of Musicians contract to covering Elvis’ eight performances from November 22 through November 25, 1956, two each date. The agreed price for all eight shows was $20,000 “against 60 percent after all expenses had been deducted. 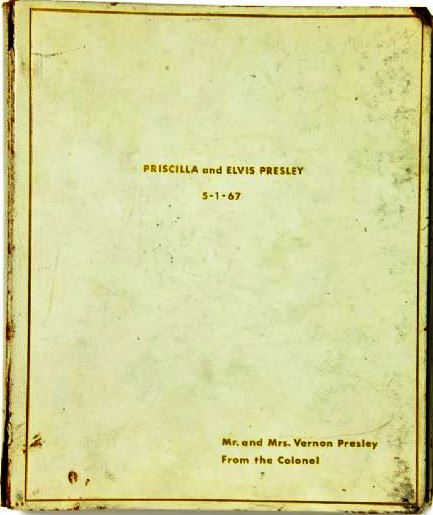 Elvis and Priscilla were married on May 1, 1967 at the Aladdin Hotel in Las Vegas. Of course photographers were present, and Col. Parker commissioned the production of a few of these commemorative albums. They held 19 studio-quality 8 by 10 inch black-and-white photographs. Included are photographs of the ceremony, family shots including the entire Beaulieu family and Vernon and Dee Presley with Dee’s children, a larger group shot with the Colonel and members of Elvis’ entourage with the families, cake-cutting pictures, and press pictures. 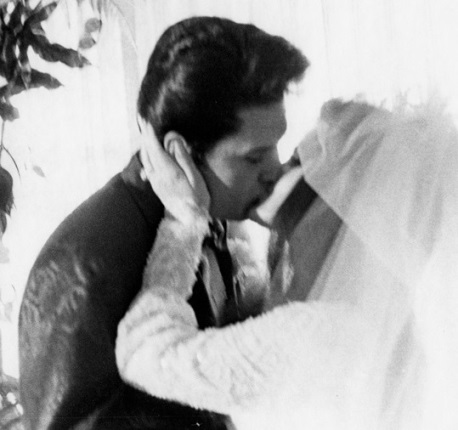 When Elvis returned to live performances on July 31, 1969 at the International hotel in Las Vegas, this was the mike he used. It is a Shure Brothers Unidyne III Dynamic Model 545G, and it contains the debossed marking “ELVIS PRESLEY.”

A few weeks into Elvis‘ engagement, he met a fan backstage who had been seated up-front and she commented that she could see that his name was on the mic. Elvis asked one of his staff to go get the microphone and when he returned Elvis gave this microphone to her.

The website estimate proved correct as the mic went for the top of the range at $15,000.

I absolutely cannot fathom why anybody would pay $11,250 for this walking advertisement Col. Parker dreamed up. For that kind of money you could buy an Elvis ring or several articles of Elvis’ clothes. I just don’t get it. 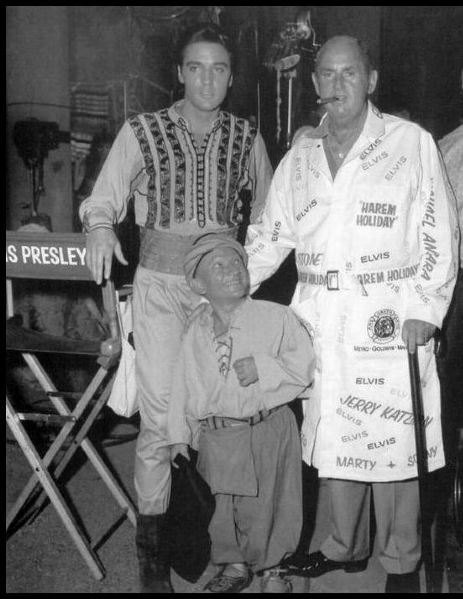 According to the auction website, Colonel Parker would create a new, custom-made, white coat covered in promotions for the current Elvis film that he would wear around the set, and especially in front of the press. This one says “Harem Holiday” which was the original name of the movie before it got changed to Harum Scarum. In addition, the coat has Elvis’ name in several colors, along with the MGM logo and the names of the other actors, producers and those involved in the making of the film.

Elvis would often adjust his concert set lists to suit his preference. This one, for 8:15 and 12:00 shows, is probably from the shows one night in 1969 at the International Hotel in 1969. In blue ink, Elvis scratched through song number 1, which was “Blue Suede Shoes” and written instead, “All Shook Up.” He left the second and third numbers as “I Got a Woman” and “That’s All Right Mama.” Four was changed from “Love Me Tender” to “Love Me.” He has changed three of the five songs in the medley that followed, adding “Teddy Bear,” “One Night,” and “It’s Now or Never.” Next he made further additions of “Sweet Caroline,” “Polk Salad Annie,” “Don’t Cry Daddy,” and “CC Rider.” It is only the last four of the fourteen original songs that he leaves completely untouched

Elvis’ collection of law enforcement badges is well known, and there is an impressive exhibit of them at Graceland. However, none of them have a more interesting story than this one. Back in 1970 Elvis received an honorary Sheriff badge from the Shelby County Sheriff at that time, Bill Morris. In 1976 Elvis asked incoming Sheriff Gene Barksdale for “the badge with the number 1 on it. On September 1, 1976, Barksdale presented Elvis with an official Shelby County Sheriff badge number 1. But the sheriff must have been concerned that Elvis might actually try to wear the badge, so he had it encased in Plexiglas block with a plaque inside a custom wooden presentation box. 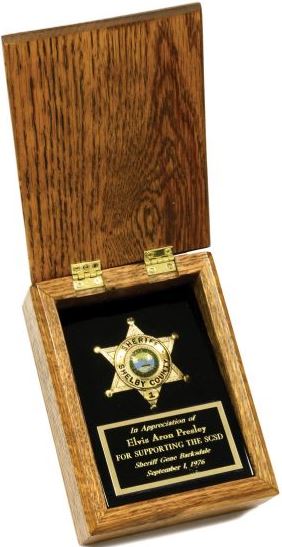 Bidding came in a little below the auction estimate with a winning bid of $3,750.

This is a never-before-seen professionally recorded Elvis concert. Four days prior to filming Elvis on Tour, director Robert Abel captured Elvis on black-and-white video footage, most likely a trial run to finalize camera and lighting directions before principal filming began on the film.

The auction website is very effusive in describing what these tapes show:

The performance captured an artist in complete command of his form, with Elvis at the peak of his singing and onstage abilities. He’s as engaged and determined as any pro athlete when the whistle blows to start a game, charging into every note with purpose, riding every melody to perfection. There is, of course, still the jovial and playful taunting and jawing with the band and the crowd, but this concert displays the power and grace of Elvis the performer that can often be somewhat lost behind the legend.

The majority of the film records Elvis’ superb performance with a combination of close-up, medium and long shots, as the director started mapping out his moves for Elvis on Tour. One imagines the copious notes about shot length, lighting, angles and other details that would consume a director preparing to capture Elvis on stage.

Each tape reel is 30 minutes long and included in the lot was a 500 gigabyte hard drive containing a high-resolution transfer along with all of the consignor’s intellectual property rights to the recording.

If it sounds to you that these tapes could easily be turned into a highly desirable DVD, the new owner must have thought so too, because he shelled out $137,500 to buy it. And he had some fierce competition as 36 bids were placed on these tapes

There were 126 lots in this fourth Auction at Graceland. In the coming weeks, we will look at many more in categories like Over-Priced Losers, Elvis Style, Gold Records, and Rings.