Elvis seems to have had a fun time whenever he wore different hats. No matter what he wore, he always looked great. Except maybe this next one.

Elvis wasn’t the only one who got to wear a German officer’s hat on this summer 1956 boat trip with June Juanico off the coast of Biloxi, Mississippi.

I wonder how many songs he sang after putting on this Santa’s hat.

I guess we are seeing the underside of the brim of this hat. Maybe a straw hat? I wish there were a side view of Elvis wearing it, but I’ve never seen one.

There are pictures out there showing Elvis wearing different versions of this style. Reader Tracy called it a Gilligan hat, if you remember that TV series. 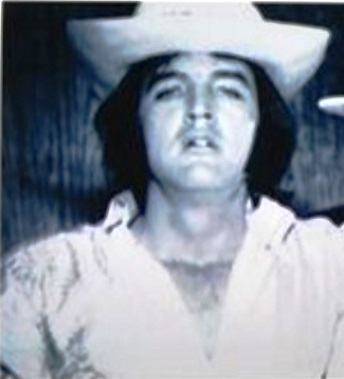 I cropped Col. Parker from this picture. Much cooler picture without him.

New reader Jo sent in this shot of an inside-out baseball cap on backwards. It was snapped on the set of Follow That Dream, which was filmed in 1961. She guesses that Elvis might have been the first person to ever do that. Wasn’t it a decade or two later that this style became popular during baseball rallies? Elvis always was ahead of his time.

This is an interesting combination. Elvis is wearing a Hawaiian lei and a cowboy hat. There are lots of photos of Elvis wearing cowboy hats, but many are movie clips or on-set shots. I wonder how many movies he made wearing cowboy hats. Would somebody like to figure that out and let us know?

Elvis got to wear some interesting head coverings in a few movies.

Can you name the movies these two came from?

This weird one comes from Harem Scarum. That’s a straw so Elvis could duck under the water and not be discovered by the bad guys. I’ve seen a lot of Photoshopped Elvis photos, but nobody has ever put this head on some other body. Seems like a natural.

These are Elvis souvenir hats that Col. Parker thought up early in Elvis’ career to sell at concerts. They would cost about $12 in today’s money.

Look close. Elvis is wearing one of those caps. The cops behind him seem to approve.

Elvis posing again. He did have fun with hats.

After the article on Elvis Baseball Hats for sale posted two weeks ago, reader Karen sent in these photos of a great Elvis hat she bought at a Festival in Michigan in 2012.

I agree.  This is a great hat.

Posted in AUCTIONS / MEMORABILIA, Main Page, PRODUCTS BASED ON ELVIS