Here’s a second look at a post from 2009.  I hope you will find it a terrific peak into the way Col. Parker managed Elvis career.

When Elvis returned to live performances at the Las Vegas International Hotel in 1969, he did two shows a night, seven-days-a-week, for a month, followed by a break of three or four months.

His third appearance there went from August 10 to September 7, 1970.  It had all the excitement of the previous two, but there was something else going on.  A complete MGM film crew was on hand to do the filming for the documentary movie, ELVIS: That’s The Way It Is.

This generated an incredible buzz, not just at the International Hotel, but for the whole city.  And guess who was there stirring the pot?  Yes, sir, of course, Col. Tom Parker.  The Colonel at his best.

Everybody knows where Elvis stayed when he played the International: The Imperial Suite that covered the entire top floor of the hotel.

Bedroom in Elvis’ suite at the International Hotel

But where did Col. Parker stay?  Well, he didn’t do bad, either.  He got the entire 4th floor.

So, why would the Colonel need a whole floor?  Maybe, just because he could pull it off.  You know a man with his negotiating skills would love the challenge of working that perk into Elvis’ contract.  But what did Col. Parker do with a whole floor?  It’s not like he brought along a lot of buddies like Elvis did, ready to party every night.  No, but Col. Parker needed the space for something else.

He arrived in Las Vegas trailed by a staff of attendants from RCA Victor, MGM and the William Morris Agency.  He kept all of them busy carrying out his plan for a heavy public relations blitz.  And, he also had the complete assistance of many of the hotel’s staff.

Colonel Parker decided that the combination of live shows plus the filming for a movie was a big enough event to warrant its own special name.  He decided it would be the “Elvis Summer Festival.”

The hotel staff assigned to him eagerly responded to his decree to staple stuff all over the walls near the 2000-seat Showroom International. The items included:

I hope these items were placed up pretty high on the walls.  Otherwise, can you imagine how much of it was stolen by the fans?  Hey, that was probably all part of the Colonel’s plan.  He had plenty more up on 4th Floor.  He could create a fresh buzz each morning by noting how many goodies were missing from the walls and replacing them.

However, Col. Parker didn’t stop with the Showroom area.  He also had the staff staple the PR stuff in all six restaurants, the bay-side pool, and a half-dozen bars.  The “Elvis Summer Festival” was in full swing, and Colonel Parker was in the driver’s seat.

Don’t you think the hotel management shuddered when the Colonel had strings of flags hung up around the building’s entrance.  Rolling Stone magazine said they “gave the entrance to the huge hotel the look of a used car lot.” 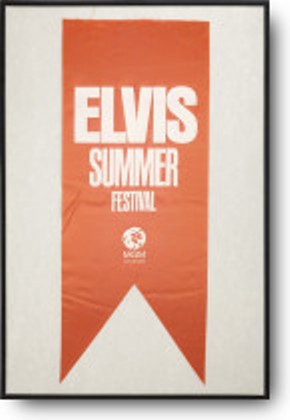 Colonel Parker wasn’t doing all this just to pack people into the showroom.  He also had merchandise to sell.  The luxurious carpeted steps leading to the casino were graced with brilliant crystal chandeliers – and Col. Parker’s Elvis souvenir stand.  Pretty girls sold Elvis Presley photos for $1 and picture books for $1.50.  We can imagine that just about everybody coming and going to the casino stopped and looked, and many bought. 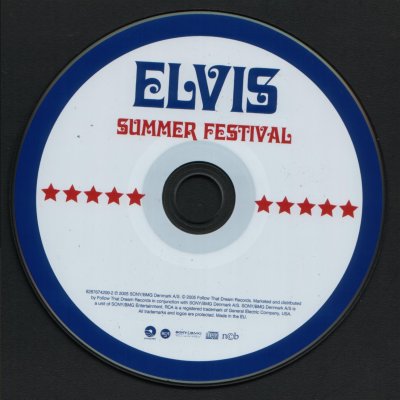 The weirdest thing in Col. Parker’s saturation campaign was what all dealers and pit bosses were required to wear – white Styrofoam fake straw-hats.  And each hat had a wide banner around it, proclaiming “Elvis Summer Festival.”  Don’t you just bet those pit bosses were so thrilled to be wearing them?  Guests could pick one up for $3.50 at the hotel gift shop. 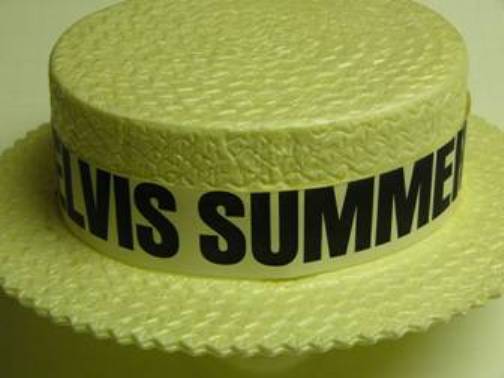 All of this was engineered at Elvis Central back in the Colonel’s 4th floor lair.  Actually, it was called Col. Parker’s “Las Vegas Office,” and the hotel installed wood paneling in one of the large suites to give him a true office environment.  However, on the walls outside his office, the colonel had staff hang a gigantic Elvis movie poster, plus banners and flags.  A bit farther down the hallway were stacks of Styrofoam straw hats.

The Colonel posted a 24-hour guard at the elevator door into his domain, and the guards kept busy by turning away everybody who didn’t belong.  However, the disappointed fans were not sent away empty-handed.  They were each given an Elvis postcard and an Elvis calendar.

Elvis also had guards at his penthouse suite, and they turned away fans – lots of them.  But there weren’t any business meetings going on inside Elvis’ suite like there were down in the Colonel’s.  No, Elvis and the boys were having some good parties, because “that’s the way it is.”